Also see table at root of wiki and the table on the documentation page of the krtkl web site.

Snickerdoodle is a compact, modular, highly-integrated embedded development platform that combines powerful processing capability with wireless connectivity and flexible configurability. Snickerdoodle utilizes a Xilinx Zynq-7000 series All-Programmable SoC which combines a dual-core ARMCortex-A9 processor with a Xilinx 7-Series FPGA. The ARM core provides a well known architecture for application development and is an ideal target for an embedded Linux system. The tightly-integrated FPGA fabric allows for connection with a wide variety of peripheral devices as well as the realization of custom logic for high-speed application-specific processing. Snickerdoodle comes with either a Zynq Z-7010 or a more powerful Zynq Z-7020 available as an optional upgrade.

The USB power input and serial console are both accessed using the USB micro-B receptacle, designated J1. Power input is described in more detail in Chapter 3 . The most notable connectors on Snickerdoodle are the 0.050 in. double row headers. There are two possible connector orientations:

CautionBox: The pin numbering appears as a mirror image between the TFM and SFM connectors as they are intended to be mounted on opposite sides of the board. This pin numbering is reflected in all tables in this manual. 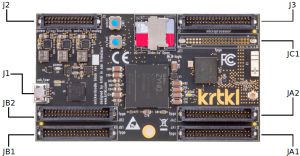 External connection to the processor subsystem (PS) is done through J3 and provides access to multiplexed input/output (MIO). By default, the MIO pins connected to J3 are configured as GPIO by the First Stage Boot Loader (FSBL) and the configuration is carried through U-Boot before being handed off to Linux at boot time. The configuration of these pins can be changed to utilize additional peripheral interfaces including Ethernet, USB host, UART, SPI, CAN and I2C. The configuration of the PS and the pinout of the connector is illustrated in Figure B.6 .

TODO: insert link to Figure B.6. 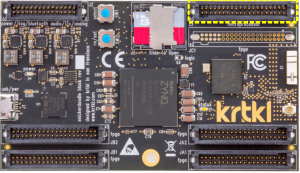 Figure 2.4 shows the unallocated MIO pin configuration for the Snickerdoodle default board preset. MIO[16:39] are connected to J3 and can be customized for application specific connections. Changes to the processing subsystem initialization (i. e., FSBL, U-Boot) and the devicetree must be made for any customizations made to the MIO configuration.

WarningBox: Care must be taken when connecting to the FPGA system as the pins can be reconfigured to a variety of input and output types.

The versatility and flexibility of Snickerdoodle is due to the integrated FPGA fabric built into the SoC. The power of the FPGA is made available on five dedicated connectors. Electrically, the connections available on these connectors have the ability to accept and generate a variety of signals; all specified in the Snickerdoodle configuration. The configuration of the FPGA pins can (and will often) include routing/multiplexing logic, logical processing and hardware acceleration to be done using the FPGA. Each connector has 25 reconfigurable I/O as well as 1 ADC input and one I2C config port.

As described in Chapter 1 , the boards can be purchased with top-facing male headers (TFM) or bottom-facing female headers (SFM). Table 2.2 shows some important details of the connectors. 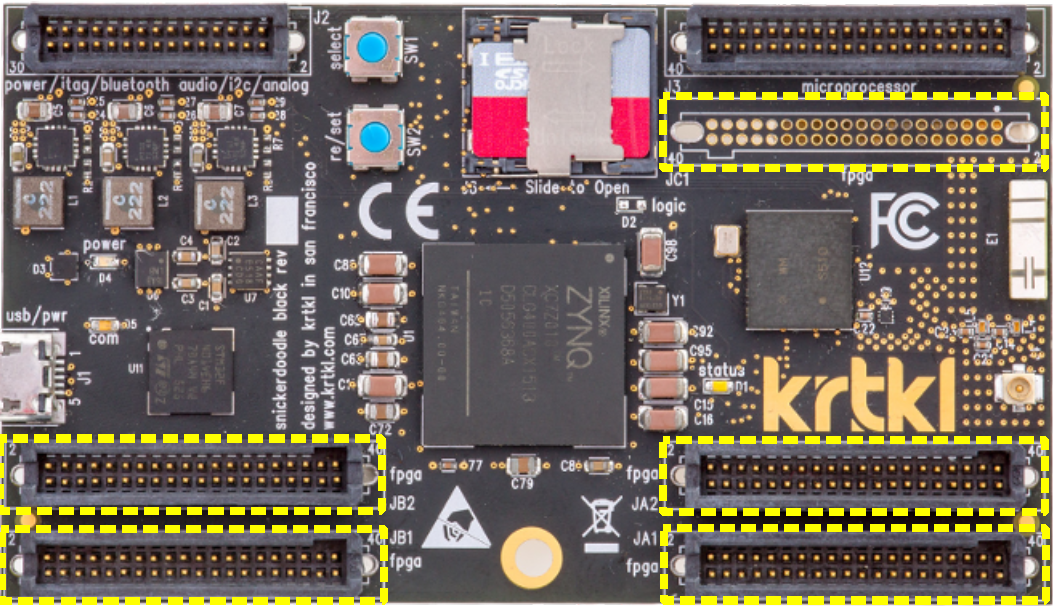 WarningBox: Plugging Snickerdoodle into a power source that does not conform to the electrical requirements can damage the Snickerdoodle.

Each FPGA connector has a +3.3V reference tied to pin 1 and the PS connector has a +1.8V signal reference tied to pin 1. Snickerdoodle can be configured to drive a variety of electronic circuits. Driving signals originating from Snickerdoodle should be connected to high impedance inputs and not used as a power source. The signals coming from Snickerdoodle can be used to control a variety of electronic circuits including motor controllers and charge circuits.

WarningBox: Do not connect different power supplies to the logic power pins on connectors on the same bank. For example, do not attempt to connect a +1.8V supply to JA1 and a +3.3V supply to JA2.

The Zynq AP SoC is divided into two distinct subsystems: The Processing System (PS), and the Programmable Logic (PL). Figure 3 shows an overview of the Zynq AP SoC architecture, with the PS colored light green and the PL in yellow. Note that the PCIe Gen2 controller and Multigigabit transceivers are not available on the Zynq7010 device.

The hardware architecture of the Zynq allows full control of the FPGA fabric through then processing subsystem. The processor acts as a master to the programmable logic so that the state of the SoC and the boot process is not dependent on the FPGA configuration. In fact, the FPGA bitstream does not need to be defined prior to booting the device. This makes the boot process more similar to a microcontroller than an FPGA. A boot image is loaded and executed upon startup which loads a First Stage Bootloader (FSBL), an optional bitstream for configuring the programmable logic and, finally, a user-defined processing subsystem application or operating system.

Step 1: Upon startup or reset, one of the processing cores executes a set of code from read-only memory (ROM) which initiates the boot process. The ROM is responsible for initiating processing of the first stage boot loader (FSBL) from a designated set of non-volatile memory (e. g., microSD card, flash). The FSBL should be included in a Zynq Boot Image which contains the data for the remaining boot process stages.

Step 2: Once the boot process is handed off to the FSBL, it configures the processing system and loads a bitstream to configure the programmable logic (if a bitstream exists within the boot image). The FSBL then loads any user-defined application/system into memory and prepares to finish the boot process.

Step 3: The user application/system is loaded during the final stage of the boot process. During this stage a secondary boot loader can be used to load a operating system (most commonly Linux) or a user defined application can be directly loaded by the FSBL. For a more thorough explanation of the boot process, refer to Chapter 6 of the Zynq Technical Reference Manual (latest, v1.10).

The boot mode can be configured wirelessly, through the krtkl app. Update: The Krtkl App is no longer available. Please see this forum thread for more information about updating the boot device.

Snickerdoodle has a 16Mbyte quad-SPI NOR flash (Micron N25Q128A11ESE40F). The flash memory can be used to provide non-volatile storage of data and program code. The flash can be used as general storage for initialization of the processing subsystem as well as configuration of the FPGA by storing bitstream data that has been wrapped in a bootable image as described in Chapter 5 .

Because of the common JTAG interface the PL system can be configured using a JTAG connection without interfering with the processor.

CautionBox: Make sure the microSD card cage is securely latched before powering your Snickerdoodle

The microSD card cage (J6) on Snickerdoodle provides a compact, locking connector for non-volatile storage of up to 200 GB. The microSD interface uses an SDIO interface that is connected to MIO Bank 501 pins 40-45 (SDIO 0). The microSD slot provides a source for non-volatile storage. The Zynq processing subsystem can be booted from the microSD connection and, optionally, a logic bitstream can be defined. For information on creating a bootable microSD card, refer to Chapter 22 .

The microSD card interface supports microSD cards of various speeds with a maximum clock frequency of 50MHz. High speed cards (Class 10) are recommended when using the microSD card as the boot device.

Both modules support IEEE 802.11b/g/n standards, Bluetooth 4.0 and Bluetooth low energy; providing Snickerdoodle with a variety of connectivity options. Figure 8.1 shows the location of the UFL jack that can be used to connect an antenna to Snickerdoodle.

Snickerdoodle has an STM32F0 series 32-bit ARM®Cortex-A0® microcontroller connected to and in control of various signals. The platform controller (links: hardware, software) connects to the

J1 carries USB signals to/from the platform controller. The platform controller firmware allows the UART interface between the Zynq and STM32 to be bridged with the USB interface to a host computer. This is most commonly used as an interface to the Linux console. The serial console can be set up to interact with any user-defined application/system; most commonly to display Linux console data. The firmware required to create the bridged connection is described in greater detail later.

Two I2C interfaces on the platform controller are configured. The first I2C interface (designated I2C1) is connected to a switch which has the ability to independently communicate over the I2C pins on each of the 7 in-board connectors. The second interface (designated I2C2) is connected to an on-board crypto-authentication device. The crypto-authentication device can be used for several purposes including wireless network security, IoT network authentication and IP/software security.

The STM32 is connected to an I2C switch that provides distribution of I2C connectivity to the connectors.

The STM32 is connected to the Bluetooth UART interface on the Wilink 8 module.

Each FPGA connector has an external interrupt pin connected to the platform controller. These interrupt pins can be used to drive interrupt routines to monitor and handle device connections.

Two timer peripherals on the platform controller are connected to the five on-board LEDs. The timers are configured as PWM outputs to give brightness control over the LEDs and allow a variety of LED patterns.

The STM32 is connected to two user buttons that can be used to implement various functionality including boot configuration and interrupt based execution.

and facilitate exchange of passwords between remote systems.

for licensing of media or IP with anti-cloning protection.

The crypto-authentication device is an Atmel ATECC508A with the following features: